Humans normally have 46 chromosomes in each cell, divided into 23 pairs. Two copies of chromosome 3, one copy inherited from each parent, form one of the pairs. Chromosome 3 spans almost 200 million base pairs (the building blocks of DNA) and represents approximately 6.5 percent of the total DNA in cells. 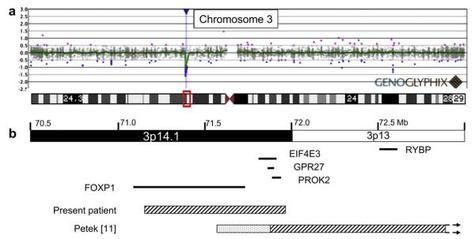 I have a DELETION of part of Chromosome 3 between the section labeled 14.3 to 14.1, including the Fox P1 Gene.  In my case, this was a de novo event, meaning, " An alteration in a gene that is present for the first time in one family member as a result of a mutation in a germ cell (egg or sperm) of one of the parents or in the fertilized egg itself."  The picture shows exactly where on the little teeny, tiny strand there is a missing piece.  The picture is from an article that I have on my Cool Sites page. The following information was found on the Lucile Packard Children's Hospital website: